During a Monroe Institute workshop that I attended earlier this year, the facilitator suggested that if we felt as if we weren’t getting anything during the meditations (visual images, messages, communication, whatever), that we prime the pump by imagining something, then following it.

She paused for a moment, looking around the room with a small smile. “I love doing this workshop in Australia,” she told us. “In Australia I can say use your imagination, and no one stares at me like I’ve just suggested you all cheat on a test. Americans assume that imagination is not real. The Australians don’t have that hang up.” I looked around the room. People’s faces were polite blanks, like they were waiting for a punch line, explanation or assurance. The perplexed energy was palpable. You could feel their question: “But is it real? How do you tell?”

I’ve had similar questions from friends and clients, people curious about how I do my psychic readings, or how I trust information that I receive through non-physical means: How do you tell what’s imagination and what’s real?

It’s a valid question, but only because we’ve been taught and believe that there’s a difference between imagination (not real) and reality, whether that reality is the physical world or visions, messages, or other “spiritual” or non-physical communication.

About ten years ago my father had a severe heart attack. In Florida at the time, I immediately jumped on a plane to get to South Dakota where my father was supposedly dying. During a layover in Houston, I sat down and calmed myself. Closing my eyes, I imagined being with my father. I immediately found him wafting around over the Southwest, looking a little confused or lacking purpose. Getting his attention, I told him that he needed to get back to his body and make a decision; he needed to decide whether to stay with the body and heal it, or move on. I told him that either one was fine, but the decision was his so it would be good to get back to South Dakota. He nodded and moved back to his body, and I had the sense that he wanted to stay and heal this body.

As my father stabilized and before his six-bypass surgery, I found myself alone in the hospital room with him when he was fairly lucid. I decided to ask whether he remembered anything about where he’d gone after the heart attack. He thought for a moment, then said, “Yeah, I was flying around the Southwest.”

Communication may not always be so direct and clear as the communication with my father happened to be, but what we imagine is not random. You don’t have to believe that. I wouldn’t recommend trying to convince yourself to believe it, arguing with yourself or brainwashing yourself into believing it because I say so it must be true (I am not your authority – you are!). It’s not a matter of faith. Try it. Test it. Play with it. When you begin to do that, you’ll eventually discover that it’s true, and know it through experience. Try priming the pump with your imagination.

About thirty years ago while I was in Spain, I sat at a café with a young man who was very outgoing and therefore intimidating to me because I was shy. I was half paralyzed with nerves when he said to me, “Don’t think, just tell me a word.” I did. He said it again, and I gave him another word. I think we ended up with ten words or so. The words all rather inexplicably had to do with the Pope, blood, guns, and Rome.

About one week later, Pope John Paul II was shot.

Twenty years ago I wrote a novel about a woman recovering from loss and injuries. Friends and family reading it now are blown away (haha) by the many parallels and details that match up with my having been blown up in Iraq. Was the story “just” my imagination?

It may be that “imagined” scenes highlight one issue, idea or theme; they may be revealing of a belief; it may be one symbol that has to be unpacked. Some details may be accurate and others may not be. The imagination may be a dense and rich scene that has to be pondered a bit to find the core. Or the imagined may have pieces of “true” or “real” tarted up within scenes to make them acceptable to our conscious minds.

I’ve developed my own language of imagination. I’ve developed little tests of perception that work for me (turning the white robed beings into monsters, for instance, as described in Application of Impossible Things). I’m not unique – you can do this yourself. 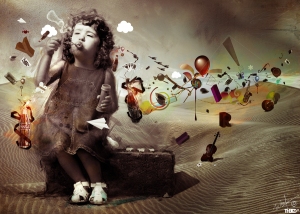 As you continue to pay attention to your own imagination, I suspect that you’ll begin to understand the language that you use to communicate with yourself. You’ll learn where to look: through “seeing” or hearing, feeling or sensing. You’ll probably begin to understand symbols, not unlike analyzing dreams. You’ll probably begin to discern what is “true” within imagined scenes and what is overlaid on them by your conscious mind, or what is window dressing to make the information entertaining to your mind. You’ll likely begin to notice little flashes of “imagination” that come to you out of the blue and learn to unpack them.

You don’t have to believe that imagination is real. Test it for yourself if you’re interested. Prove it. Try priming the pump with imagination. Explore.